This article provides a review of monofins. We will discuss what that is, the various uses people make of these products, including in a freediving competition, and we will compare some popular brands and models of mono-bladed fins to see which might be right for you.

One thing we will discover is there is not just one best product for all swimmers and divers. Depending on your experience and your needs, the right answer does not always have to be the most expensive or high-performance product.

What Is the Monofin? A monofin is a swimming or diving fin which provides, as the name implies a single-bladed fin, instead of the usual bi-fin. The monofin uses one separate fin on each foot. With a mono-blade, the swimmer or diver places both feet into openings at one end of the single, large fin. Usually, attachments such as straps will hold the person’s feet in place, although fully enclosed foot pockets are also available.

Since the legs and feet cannot kick or stroke the water separately when using one blade; a different body motion must be used to propel the swimmer or diver through the water. They often describe this as a “dolphin kick”, mimicking the undulating motion of a dolphin’s body going through the water.

The single-blade design, with its large surface area, maximizes this dolphin-like movement, providing extra power on both the up and down portions of the kick, and this enables the swimmer or diver to move much more efficiently and more rapidly than with the use of standard kicks and bi-fins.

Virtually, all free-diving competitors use mono-bladed fins instead of bi-fins. Because the mono-blade allows a swimmer or diver to move more rapidly and efficiently through the water, divers in many underwater activities are able to move farther and faster with less energy expenditure and oxygen consumption. These monofins aides those that depend on holding their breath during such competitions.

There are several types of monofins, the three main types being:

Most single-bladed fins made for children or otherwise made more for decorative use—such as for cosplay or mermaids for example—do not supply the quality of materials to make them useful or safe for even basic recreational activity. These mono-blades are made of cheap plastic and not built to endure the hydraulic pressures occurring with repetitive kicks or strokes in swimming or diving.

Note that some “youth” mono-blades may be classified as recreational, in the sense, they are sturdy enough to allow a young person to learn the basics of using the single fin, but they are still “toys.”

Recreational monofins are designed to provide good performance and durability for the average swimmer and diver and at an affordable price.

The main drawback to these products is that they might use less-expensive, flimsier materials to reduce their retail prices, but also to make the products much easier to use (to kick or stroke) especially in pools and less challenging environments.

This ease of use means less power in the stroke, so they are not suitable for advanced or competitive divers.

Naturally, these high-performance products are the most expensive options as well.

We have talked about three main types of monofins you might encounter. Here we will talk about basic product specifications or characteristics you should expect to encounter when shopping for and assessing recreational or competition-style single-bladed fins.

Construction materials for mono-bladed fins can range from inexpensive rubber and plastic to more durable and high-performance enabling fiberglass and carbon fiber. Generally, the chief benefit of the more expensive materials is they produce a high “responsiveness” in the blade which means when the blade is bent by the pressure of the water moving against it during the kick, the blade snaps back quickly and sharply. This gives a natural boost to the kick and makes it easier to do.

Most single-bladed fins made for children or otherwise made more for decorative use—such as for cosplay or mermaids for example—do not supply the quality of materials to make them useful or safe for even basic recreational activity. These mono-blades are made of cheap plastic and not built to endure the hydraulic pressures occurring with repetitive kicks or strokes in swimming or diving.

Note that some “youth” mono-blades may be classified as recreational, in the sense, they are sturdy enough to allow a young person to learn the basics of using the single fin, but they are still “toys.”

The stiffness of any type of swimming or diving fin will determine how easy the fin is to stroke or kick with through the water. Thinner, plastic fins may be easier for younger and inexperienced swimmers to use. However, they will not generate sufficient power to be useful as competition fins. Further, thinner, and cheaper fins will not hold up to more challenging environments, say in strong ocean currents, nor to more rigorous use.

Monofins come in different sizes and styles of foot pockets. To secure the foot to the fin, while enabling ankle flexibility for pointing the toes, many mono-blades come with foot-straps. These can lower the overall power you can produce, and competition-style foot pockets often use wrap-around pockets to give the swimmer or diver more power. Sometimes, fitting the foot in the fin can be an issue, and different methods (e.g. using fin socks or trying open-toed fins) can be used to make the fin fit more snugly and comfortably.

Heavier monofins will be more difficult to move through the water. However, depending on their materials and their design, they should be able to produce more power per kick than lighter, flimsier materials.

Heavier monofins will be more difficult to move through the water. However, depending on their materials and their design, they should be able to produce more power per kick than lighter, flimsier materials.

Pricing for monofins varies a great deal depending again on the type and quality of the particular product. Mono-bladed fins mainly aimed at children and youth are not usually very expensive, with prices from around $30 to $70. Recreational fins can be priced from around $100 to $400. And competition fins can cost around $150 to around $800 or more.

We picked a few similar products available on the market to see how they compare. 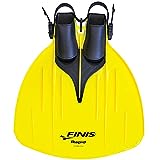 The main features of this fin are its ease of use. The foot pocket is designed to fit a large range of foot sizes. The foot strap is adjustable and includes a quick-release mechanism. The manufacturer touts the “flexibility” of the fin, and while it may be true, this monofin could be used in the ocean. Its performance limitations suggest it would be better left for use in training in swimming pools.

This is a plastic, light-weight fin, with semi-rigid to flexible construction. The product provides a reasonable amount of surface area and weighs 4.6 pounds.

Described by the manufacturer as being for “novice or recreational swimmers,” this plastic fin is clearly not designed for competitive or rugged use. There are some concerns about the durability of the product even in light recreational usage, but it should be OK for beginners.

The monofin is easy to get on and off. Comes with an adjustable easy-to-use foot strap that allows quick removal of the fin.

The fin touts a 7-degree angle in the foot pockets, which can increase power to the fin during the stroke or kick. The fiberglass is said to be high quality and the product should be durable for more rugged use—for example, fin swimming, underwater orienteering, free diving, and long-distance swimming. It also provides “ribs” to more effectively channel water during the kick.

This fin comes with soft-rubber foot pockets and includes neoprene socks to increase comfort and help secure a snug fit some swimmers and divers may need which because of the XL foot pockets.

This is described as a “sport” monofin and its fiberglass construction and choice of fin stiffness mean it should deliver more power than a standard recreational fin. It is worth noting that Leaderfins offers a more expensive carbon-fiber model of the Sports fin, which presumably delivers more power than this fiberglass model.

This fin comes with soft-rubber foot pockets and includes neoprene socks to increase comfort and help secure a snug fit some swimmers and divers may need which because of the XL foot pockets.

This product offers a dolphin or whale-style blade, which is often found with higher-performing monofins. The double-wide blade and carbon-fiber/fiberglass construction provide an efficient platform to move the swimmer or diver through the water with less energy spent than fins with cheaper materials and smaller blades.

This is a carbon fiber and fiberglass construction high-performance fin. The blade portion of the fin provides a “double-wide” surface area, and the product weighs slightly over 5 pounds.

This monofin is designed to maximize the efficiency of the swimmer’s or diver’s stroke while also minimizing cramping during long training sessions. While not a top-of-the-line competition fin, the Scubapro offering is considered a high-performance recreational fin. Performance can also be adjusted by the choice of a stiffer version of this blade.

Designed for teenagers and adults, this fin is a step up from beginner fins, and will provide plenty of sturdy use and good training for those whose swimming and diving skills require a more powerful fin.

This recreational fin has a fiberglass blade, good surface area, and the fin weighs between 5-6 pounds, depending on the size chosen. Blade stiffness comes in three grades: soft, medium, and hard, so performance will probably differ depending on which the diver chooses.

This is a solid recreational fin, great for free-diving and training. Perhaps priced a little high for average swimmers and divers to feel that it is a good value

While the fin comes with soft rubber foot pockets, they advise swimmers and divers to wear full neoprene socks for extra comfort and to ensure a snug fit. Without the socks, some users may have problems with fit.

Keep in mind there are a lot of factors to consider in assigning a “winner” to our comparison. Beginning monofin divers and swimmers will mainly be looking for a good value or sometimes just a good training tool that won’t cost them too much to try things out.

Meanwhile, divers looking to take that next step up in performance from a beginning fin, may still not see a good reason to spend on a high-performance option. It all depends on a person’s commitment to their diving and their budget.

However, in our comparison, the Scubapro Element M1 Monofin wins with an average of 4.25 stars. The M1 is not quite a competition monofin,  and its not-too-expensive price tag reflects this. If you’re looking for a real high-performing option for your training and underwater adventures, the Scubapro offering seems to be the ticket. Have fun! And safe diving!

The Best Water Shoes for Men for 2021

Titan Black Wetsuit Review: Is It Worth Buying?